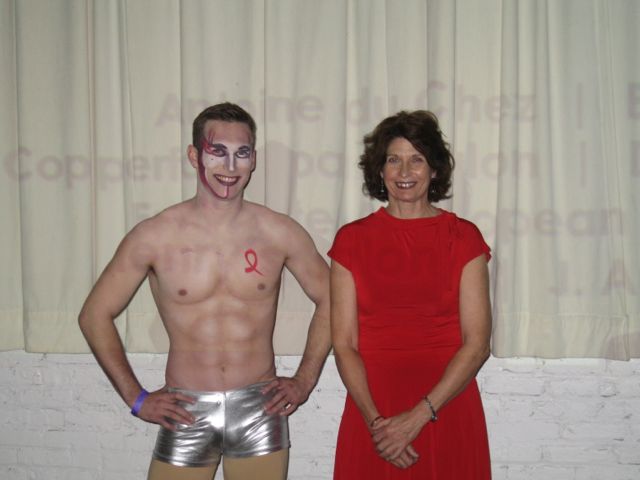 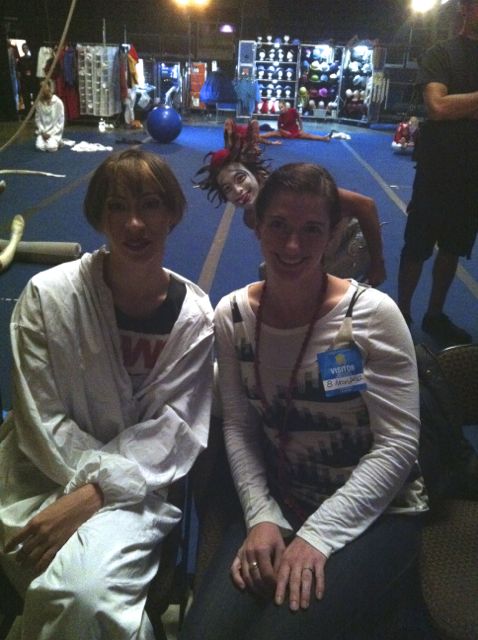 We were honored to visit with Tanya Burka backstage at Cirque du Soleil’s show: Quidam. 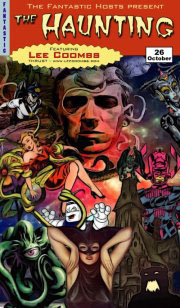 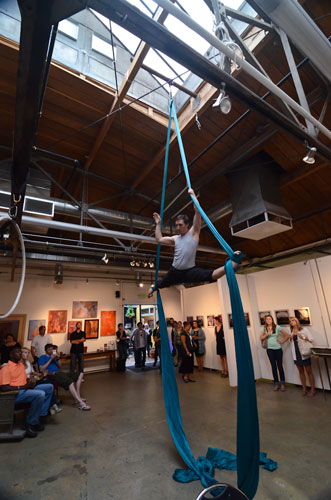 Our newest performer, Jamey Atkinson is also one of our newest instructors. Jamey worked with Disney on Ice. It is great to have Jamey as one of the team! He brings his show style and positive energy to all his aerial work. Photography by: Bryan Lopez 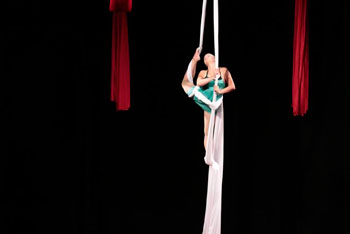 Our Company show, Emotions: An Aerial Exploration was a success. This was our most theatrical setting and the range of expression and artistry by students and teachers received a standing ovation. We were happy to have the show at the King Center on the Auraria campus. Photography by Timothy Knott. 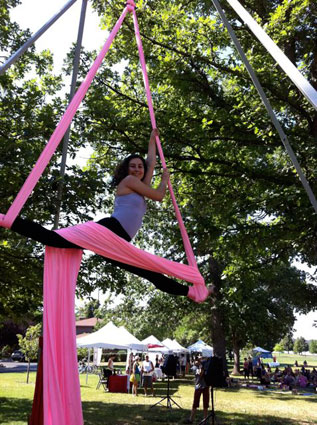 AFA celebrates over 10 years of performing with the Church night club. We
have appreciated the support of the Christou family. AFA will perform at
Yoga Rocks the Park during the summer. We had fun July 1st! Megan,
Christina, and Jamie performed.

Lynn will be headed to Montreal for the Circus Festival there to see friends
and performers and watch lots of shows! 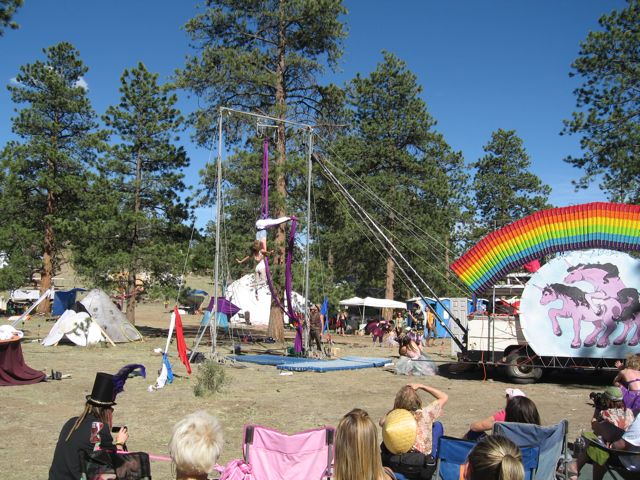 AFA performers celebrated one of our own couples as they joined in matrimony and said their vows on stilts at Apogaea. Their first dance was in the air.
Congratulations to Jill and Aaron. The wedding was a collection of
performances and joy! 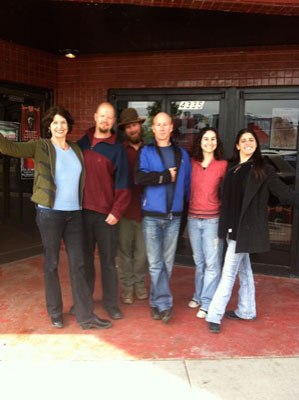 The Second Annual Aerial Acrobatic Arts Festival was positive and inspiring! The artists came from all across the US and Canada for the two shows. We awarded Best Artistic to Ann Stimmel on Aerial silks, Emily Knoblah Best
Technical on Corde de Lisse, Best Over-all Performance award was given to Sara Knauer on Solo Silks, the Audience Choice was awarded to Colorado aerialist Allyson Ritchie. Our Young Aerialist from Seattle, Una Bennett on Corde de Lisse, and our Guest Innovative Performer was from Montreal, Rachel Gauthier on Trapeze and silks. Thank you to all the volunteers, sponsors and artists who made the Festival a success! 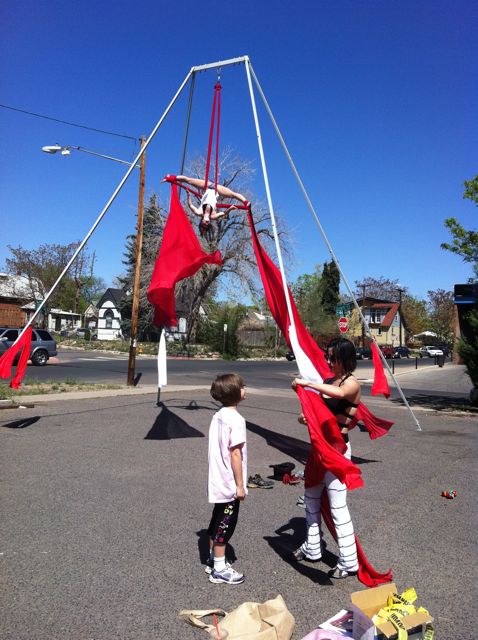 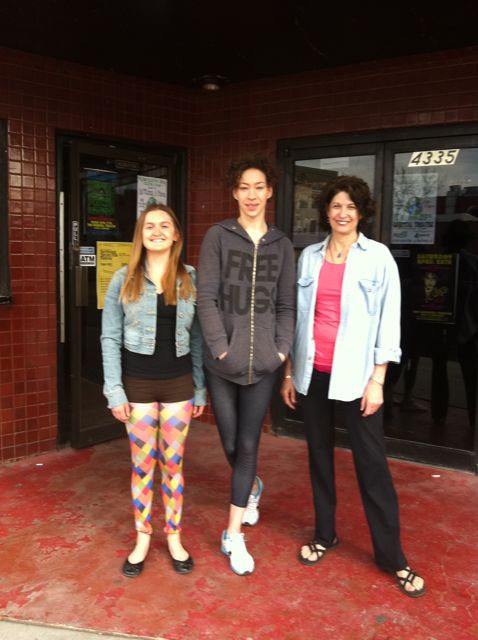 Tanya Burka came to Denver and did 17 hours of workshops on hoop, silks, contortion, and partnering as well as private sessions. Patti Miller organized the workshops along with Lynn and the money raised was donated to the Aerial Acrobatic Arts Festival. 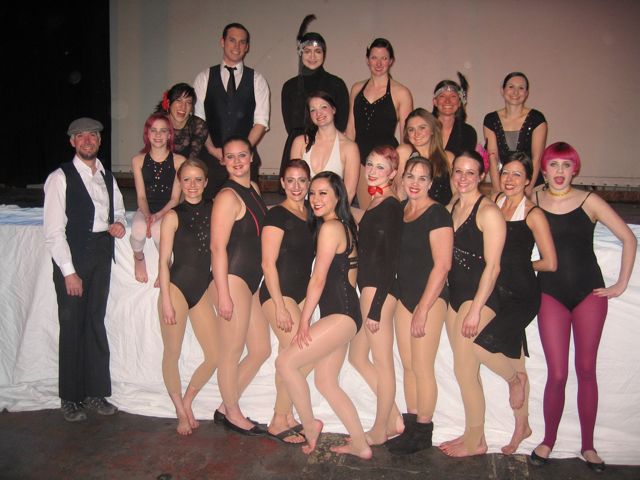 Our Company show Razzle Dazzled: An Aerial take on Chicago was a true
success. It is our best show yet!

We have been performing at the Church Nightclub in Denver since 2002. Elizabeth Smith is one of our performers and also she is an excellent teacher. Liz has a unique style of movement and she is willing to share her ways of linking tricks with our more intermediate and advanced students.

Tatanya Hamermesh is the director of our school and also performs at the Church nightclub. Over the years, there have been many performers who have done shows at the club. Tatanya was the first.